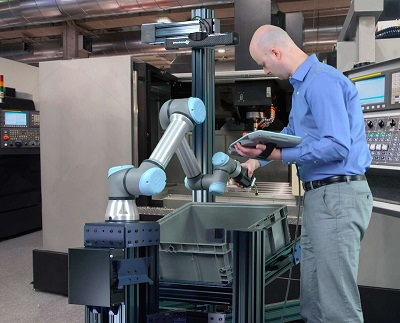 While 2020 was not the best year in a number of ways, there were several bright spots in the automation world. Many new products that were released this year can help to make your production tasks more efficient.

On the robotics front, Universal Robots released their ActiNav bin picking solution which is fast to deploy, easy to use, and fully autonomous. A true game changer in the bin picking field. This year also saw the release of the MiR250 mobile robot with a 250 kg payload, 13 hour run time, and more agility than any other AMR on the market. Robotiq released their improved Hand-E gripper (more force, higher friction payload) and their new palletizing solution.

Moxa's EDS-2000-EL series Ethernet switches are almost as small as a credit card but are jam-packed with smart features. It is the best option if you are looking to use a reliable, unmanaged switch but don't have a lot of space.

Temperature scanning became important this year for obvious reasons, and the PSC-400FCS body temperature inspection system from Process Sensors can both ID employees and check for elevated temperatures. Ask us for a live demo if you want to see this amazing technology in action.

On the traditional motion control side of things, Yaskawa's GA500 Microdrive is sustainable, flexible, and easy to use. And Parker's ACR7000 series servo controllers are built on their popular ACR9000 platform.

Last but not least, the machine vision world saw the release of Omron's FJ2 cameras with state-of-the-art CMOS sensors, frame rates as fast as 282 FPS, and resolutions ranging from 0.4 MP to 5 MP in both monochrome and color versions. LMI unveiled their Gocator 2400 blue laser models which are designed for 3D scanning of shiny materials. The Asyril EYE+, released late in the year, allows you to control the hopper, Asycube, camera, and robot from a web based interface.

If you have had a chance to use any of these new products in 2020 we hope they have made things a little easier for you. If not, 2021 is right around the corner!
Back to News Article List...
Posts by Category