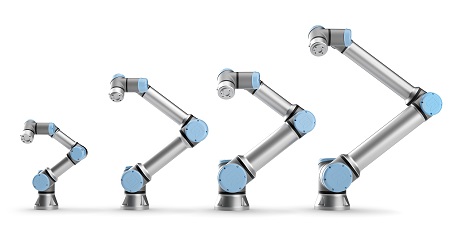 Recently Axis New England reached a significant milestone as we deployed our 1000th Universal Robots arm. As one of UR's original North American partners, Axis has been helping customers implement collaborative robot solutions since 2013. Just over eight years later, there are now more than 1000 robots operating throughout a client base of over 285 companies in New England.

Eight years ago, the cobot market was still brand new and most people were unfamiliar with collaborative robot technology. UR changed all that with their robot arms which were safe, flexible, and easy to program. Business owners and operators with no robot experience whatsoever could now quickly and easily solve their application challenges. The list of industries in New England that have benefitted from UR cobots is a long one. From medical device and pharmaceutical to automotive, packaging, semiconductor, and all types of manufacturing, the applications for cobots have proven to be almost endless.

Universal Robots was the cobot leader back in 2013 and they remain the market leader today with over 50,000 collaborative robots installed worldwide. We are proud to have grown with them as together we've helped businesses of every size automate their repetitive processes and freed up their workers to take on more enjoyable tasks. We look forward to installing the next 1000 robots and beyond.

"Over the last five years I have worked extensively with Axis New England. Their expert knowledge of the Universal Robots Collaborative Robot has provided customers the opportunity to automate numerous projects and applications admirably. Axis New England's achievement of one thousand (1000) Universal Robots Collaborative Robot deployments was made possible by their tenacious dedication and support to their customers and ever-growing application expertise. I am eager to watch their success flourish, and I look forward to celebrate their next 1000 robots."